Hunger Games through the Ages Wiki
Register
Don't have an account?
Sign In
Advertisement
in: Tribute, Victor, Rebel,
and 4 more 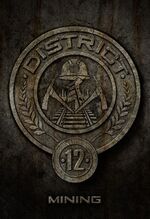 Katniss lived her whole life in District 12. Her father died when she was 11 and she has had to take care of her mother and younger sister. Her mother was unable to care for them because she had become mentally unstable from the death of her husband.

When Katniss was 16 her younger sister, Prim, was reaped, Katniss volunteered in her place. For more information on her 74th Hunger Games experience see here.

After the Games, Katniss began living her life in the victors village with her mother and Prim. She also lived near Peeta Mellark and Haymitch Abernathy. She was having a little bit of trouble coping with all the things she had seen and was having dreams about them. Each victor is supposted to take up a hobby after they won their Games because they don't have to go to school or go to work. Katniss pretended to become interested in fashion (which Cinna was really doing for her) and Peeta took up painting.

When Katniss was 17 she was Reaped for the 75th Hunger Games. For more information on these Games see here.

Katniss was rescued by District 13 and she seemed to stick out there. She did what she wanted, when she wanted. She didn't stick with their schedule. She eventually went on a mission to a hospital in District 8, but they were bombed by The Capitol and her and Gale blew the planes up.

She went into training and eventually went to the Capitol to assassinate Snow. After excaping various pods and evading Peacekeepers, she made it to Snow's mansion and saw Prim die.

She woke up in the mansion and eventually got to assassinate Snow. Only she didn't. She realized that it wasn't Snow who killed her sister but Coin. Katniss turned her bow and shot Coin and killed her. Snow then died from an unknown cause.

After, Katniss and Peeta were married and had two children, a boy and a girl. Haymitch begins to raise geese, and is still an alcoholic. Mrs. Everdeen moved to District 4, because there were too many painful memories back in District 12. Gale moved to District 2 because he knew that Katniss would never look at him the same again because he may have killed Prim.

Katniss is very strong and bold. She doesn't take crap from anybody and she will stand up for the ones she cares for. She is very opinionated and will not allow other people to try and use or control her. She also has a hard time following directions. Katniss has brown hair and gray Seam eyes. Gray eyes are common in the Seam. She is average height and an average weight. She claims that she is a fast runner. She is also very agile and flexible. Her father taught her how to do multiple things like swim and hunt. She is also very flexible and agile.

Katniss participated and survived two Hunger Games and she killed many people in the Capitol. 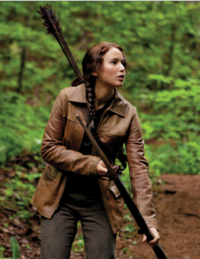 Peeta is her "crush" and eventually he became her husband and had two children with him. She eventually came to love him and she cared for him. But then he was hijacked and he tried to kill her multiple times. She forgave him and helped him heal and they came to love each other again.

They have been hunting friends for a long time. Gale eventually came to start to develop a crush on Katniss but Katniss didn't like him that way. He was then said to be her cousin but in private, he kissed her and she started to like him too. She didn't know if she liked Peeta or Gale better but she choose Peeta when she realized that Gale may have killed Prim.

Prim is Katniss' little sister. Katniss cared so much for Prim and saved her from the Games. Katniss also risked a beating every day so that she wouldn't starve to death.

Katniss doesn't really ever agree with what Haymitch tells her to do. But she does care for him and they are like family.

Effie sometimes annoys Katniss and she gets fed up with her always needing to be on time but Katniss also really cares for her and doesn't want to ever see her hurt.

Cinna is the #1 person that Katniss would have gone to for adice. She really liked him from the start because he showed that he was different from the other Capitol citizens. Cinna was a very gifted stylist until he made her wedding dress change to a mockingjay suit, which got him killed.

Cato really hated Katniss because she got an 11 in training scores. She also outsmarted the Careers which made him hate her even more. And if that wasn't enough, she blew up their supplies. Katniss eventually killed Cato.

Katniss and Rue were very close even though they didn't talk much. Rue admired Katniss in training and they allied and blew up the Careers supplies. Rue was killed by Marvel and Katniss killed Marvel.

Katniss is played by Jennifer Lawrence in the movie.