Hunger Games through the Ages Wiki
Register
Don't have an account?
Sign In
Advertisement
in: Tribute, Rebel, District 7,
and 5 more 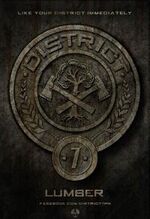 Johanna won the 71st Hunger Games by pretending to be weak and that made all the other tributes leave her for last. Then she unleashed her full potential and violently killed all the remaining tributes.

Johanna, being the only remaining District 7 female victor, was Reaped for the 75th Hunger Games. She was approached by Haymitch before the Games and joined the rebel alliance. She, along with Blight, resued Beetee and Wiress from the bloodbath. They then travelled into the jungle and got caught in the blood rain, which caused Blight's death.

Johanna took Beetee and Wiress to the Cornucopia where they found Finnick, Peeta, and Katniss. Eventually they found out about the clock themed arena and while they were distracted, Wiress was killed. Katniss killed Gloss and Johanna threw an axe into Cashmere's chest.

After they had made a plan to electrocute the food in the water, Johanna and Katniss took the wire to the lake in the middle of the arena. The wire was cut about halfway by Brutus and Enobaria. Johanna pretended to kill Katniss and dug out her tracker. She then led Brutus and Enobaria away from Katniss and they followed Johanna.

After, Johanna went home to District 7.

Johanna is very intelligent and stealthy. She became a rebel right away and was willing to give her life to save others. She can also be cruel and hateful but at other times she can help others and be kind.

Johanna has brown, wide-set eyes with short and spikey brown hair. She is described as being attractive, as Snow wanted to prostitute her.

Johanna most likely killed some tributes in the 71st Hunger Games. She was also in the 75th Hunger Games and was present at the bloodbath but it is unlikely that she killed anybody there.

Johanna states that there is nobody she loves left. It is assumed that her loved ones where killed because she said that she wouldn't prostitute for Snow.

(Johanna and Finnick are not together)

Johanna and Finnick seem to have a close bond. IT is unknown how they know each other. They may have just been friends, as most victors tend to make friends with other victors. they are the bestest couple and their shipname is jinnick!!

At first, Katniss and Johanna seem to hate each other. But eventually they come to like each other, but they don't show it. Johanna tells Katniss that she has to kill Snow and Katniss volunteers to live with Johanna because District 13 will not allow Johanna to live alone. they are cute together!!