Hunger Games through the Ages Wiki
Register
Don't have an account?
Sign In
Advertisement
in: Tribute, 74th Hunger Games, District 1,
and 3 more 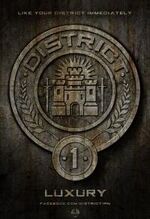 During Glimmer's interview with Caesar Flickerman she did great. She was described as looking sexy and she seemed kind and sweet. But her tribute token, an emerald ring, because when you twisted the emerald a poison spike popped out. She wasn't disqualified because there was no way to proove that she knew about it.

Glimmer got a training score of 10.

After the Games had started, she started killing in the bloodbath. She got the bow and arrow that was supposted to be Katniss' and she killed a few tributes as well. She then allied with the other Careers and Noah and Peeta.

She tried to climb up the tree after Cato did to try and get Katniss but she saw that the branches were weak so she didn't. Then she tried shooting with the bow and arrow but she was very inexperienced.

She died when Katniss dropped the Tracker Jackers on them. 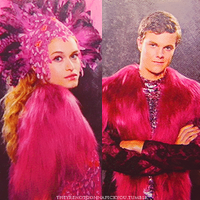 Glimmer appears to be a regular girl that has everything she ever wanted but she is actually a lethal killer. She is great at deception and her looks make you think that she is a fairy princess but in reality she is far from it. 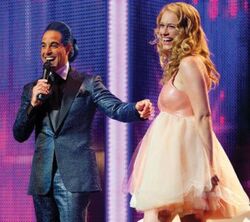 Glimmer was an attractive girl. She has blonde hair that fell to her shoulders and she was average height and weight. The thing that most described her were her eyes. She had sparkling green eyes that stuck out from others.

Glimmer was at the bloodbath and she killed one tribute.

Glimmer is played by Leven Rambin in the film.