Hunger Games through the Ages Wiki
Register
Don't have an account?
Sign In
Advertisement
in: Districts, District 4, Career

"Do you like seafood? Shrimp and crabmeat? Often overlooked, District 4 plays an essential role, bringing us the bounty of the sea. These citizens are adept with nets and tridents, and can swim like fish themselves."

District 4's main industry is fishing. They catch and send all sorts of sea food to the Capitol. Crab. Lobster. Fish. Anything found in the sea belong's to District 4. 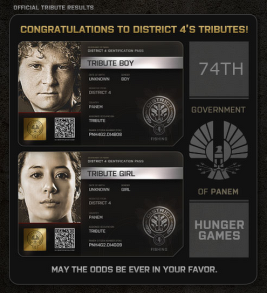