Hunger Games through the Ages Wiki
Register
Don't have an account?
Sign In
Advertisement
in: Districts, District 11

District 11 grows and provides all of Panem with all sorts of vegetation including fruits, vegetables, wheat, etc. They have many large fields and orchards. They also have a very large population of Mockingjays. 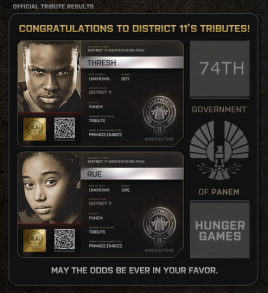